‘This is like an old passport, my first one, 1962 when I was only 17, or whatever; getting on a ship. I tried to make it like looking at sand and cave paintings, by using the symbols. Then I juxtapose it a bit with Bermuda, parts of Bermuda…’ 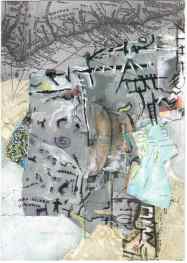 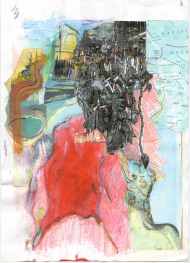 ‘Part of a mask, you know. Yes, this is like the American Presidents – I suppose in Afghanistan and in other places– it sort of gives it away. Then on the side you’ve got the Statue of Liberty; then we’ve got all the children from different nations. South Africa, New York City, and this is one of your Euro places. I just tried to put across the idea that Afghanistan must stand free. Then we go into New York. Then the information of newspapers: newspaper cuttings; it’s about occupation: ‘The holder must not engage in gainful occupation.” That’s out of my passport.’ 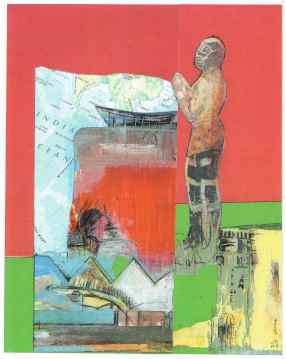 ‘Again we had green and yellow, the African flag; I tried to use that idea. Very bold colours that say something about the African designs and people looking out at the picture to – even if there’s India, too…’

‘This is a mixture of all kinds of things I was putting in; and just kept on piling things on top of each other. It starts off with Brazil and then it goes to Australia with the same idea. The boats of the slaves from Africa; and then the palm trees. It talks about people hiding behind the blinds, or being juxtaposed on top of each other.’

‘This one I tried to, I suppose, bring in desert; tried to bring in places like Australia. Looking at architecture as well, buildings, windows; looking through; just trying to make a landscape, building up layers of colour and shape; a very square idea of what the plains were like.’

This is a sculpture from Africa. Using a canvass almost like a sail on the top of the oceans; then there is the ‘Queen of Bermuda’ at the very top, and parts of a stamp with migration on it. I just wanted to say something about migration and people being exported to and fro, or even imported. The fish, again; looking at the islands, the palm trees. The ‘Queen of Bermuda’—this is before it was refitted, when it had three funnels. This is from the old days, from 1930s.

Bread and Salt, Stories of Art and Migration, was published by Vrede van Utrecht on Friday evening, a part of its final community arts festival. Launch and festival were both wonderful, and I’ll write more about them as soon as I have time. The main thing for now is that that book is available for download here, or in print from Vrede van Utrecht.

I’ve also added all Bill Ming’s images from the book here, with some of his reflections as captions: just click on the images to open up a slide presentation and you can read Bill’s words.

My Tweets
Join 4,509 other followers