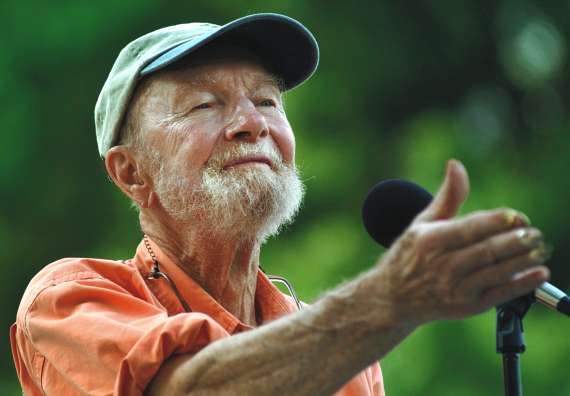 ‘Pete Seeger’s great work was not just singing the songs, but getting everybody else to sing them—getting his audience, us, to sing.’

Columbia Records (CBS) must have produced many odd records since 1888, but Pete Seeger’s Greatest Hits is certainly one of them. The blacklisted singer had not been heard on radio or TV for more than a decade, so concerts and records were his main outlet. 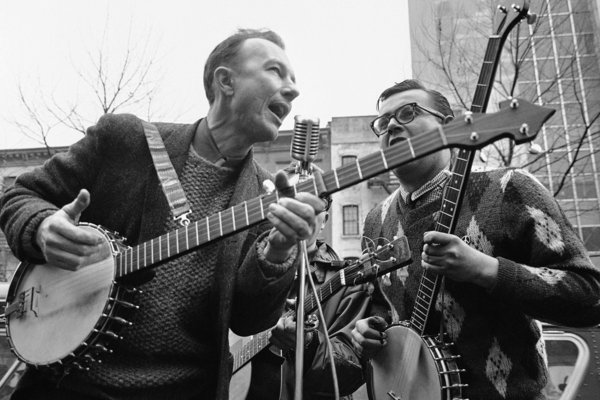 Greatest Hits is a ragbag of old songs (We Shall Overcome), new songs (Little Boxes) and his own songs (Where have all the flowers gone?), mostly recorded live. It came out in 1967, when Pet Sounds and Sgt. Pepper dominated the airwaves, so the music must have seemed positively old-fashioned, even naive: Seeger accompanies his high tenor on the banjo, a strummed guitar or sings a capella.

But it’s the live nature of the recordings that matters because they catch Seeger’s rapport with audiences and the  collective nature of his music. He stands there, not as an entertainer but as a facilitator. On his tongue, the chorus of a song is what its name suggests: an occasion for choral singing. So he tells the audience the words of the next line, in case they don’t know it—the song can wait while they catch up.

This is ancient stuff. Seeger’s audience is like the Chorus in classical Greek theatre: an enactment of community, expressing its collective values. It is solidarity sung.

It is also powerful stuff, as Seeger knows, To be part of the ‘mighty wind’ produced by thousands of vocal chords can be thrilling. Marching for civil rights in 1960s Alabama, in front of hostile crowds and troopers, took real courage: singing ‘We Shall Overcome’ together gave you control of the space and sucked freedom into your expanding lungs.  In the late 1980s, the Estonian people literally sang Soviet troops out of their country in the Singing Revolution.

‘I guess nobody who’s never actually faced one of those policemen can know exactly how much bravery it takes to be just this gay and cheerful in the face of all kinds of things.’

There’s a welcome growth in choral singing  at the moment, in TV reality and in actual reality, but its character is  abstract and skill-based. It’s community art without politics, shanties without work. Pete Seeger held no auditions: he knew that what mattered was community among an audience with shared values.

Are there imaginative artists in popular music willing to reach across the profitable barrier between stage and stalls to  make their audience co-creators in a new  music? The ancient power of singing together is only sleeping.

Phil Ochs’ tribute to Woody Guthrie applies equally to Pete Seeger, whose integrity made no distinction between his art and his life.

Now they sing out his praises on every distant shore
But so few remember what he was fightin’ for
Oh, why sing the songs and forget about the aim?
He wrote them for a reason, why not sing them for the same