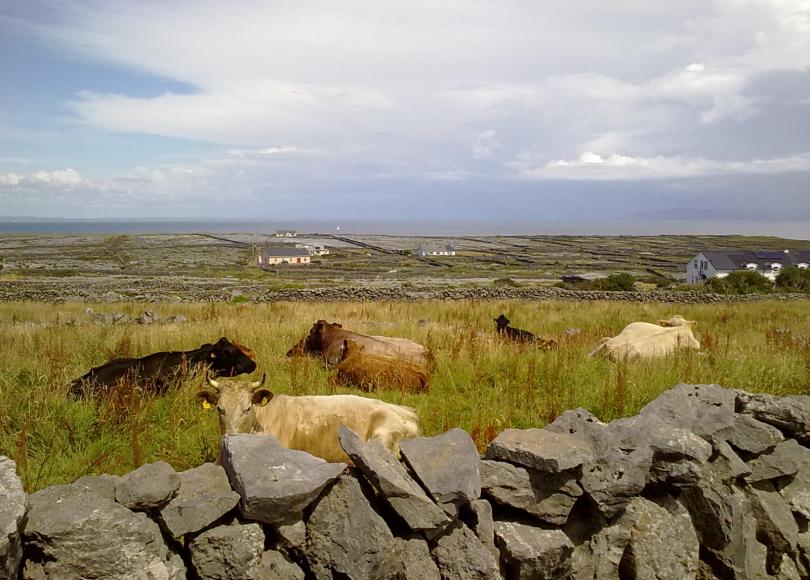 ‘Inis Meáin Island is where you’ll find a more authentic escape from the modern world. With a population of 200 people, it is the less visited of the three islands. Visiting Inis Meáin will give you the best chance to acquaint yourself in the precious sanctuary of Irish Cultural tradition.’

This weekend, Irish National Opera were expecting to explore opera with the community of Inis Meáin (pronounced Inish Man), off the west coast of Ireland. The plan involved an open-spirited mix of art workshops, intimate performances and conversations, all intended to help people get to know one another and to inspire ideas that could become part of INO’s community opera project for Traction. That opera will exist in virtual reality, and audiences will experience it through VR headsets. As far as we know, it’s the first attempt to create a community opera in that form, and it obviously presents many artistic, technical and human challenges. Equally obviously, INO did not anticipate that they’d be doing the project constrained by the public health measures taken to control a global pandemic. On 21 October, Ireland went back into lockdown, and this weekend’s mini-festival has been shelved.

The Traction project began in January 2020 and runs to the end of 2022, by which time it will have created three new community operas and tested innovative digital technology designed to support inclusive approaches to co-creation, production and performance. INO’s VR opera is one of those: alongside Inis Meáin, it also involves communities in the Irish Midlands and at the edge of Dublin. (The other operas are being created with people from Raval in Barcelona, where the Liceu Opera House stands, and with the inmates of a Portuguese prison and their families.) Progress was made more difficult by the spring lockdowns, but the partnership was still primarily involved in planning and preparation. Creative work with community groups wasn’t expected before the summer, by which time it was possible to begin workshops, albeit in Covid-secure conditions. In July, co-creation activities began in Leiria Prison, where more than 50 young men have taken part. Then, in early October, workshops had to be suspended as there were a small number of cases at the prison: we hope to resume later this month. The Catalan project has faced even greater difficulties in a city hit hard by the first wave of the disease, and workshops are not expected to begin for some weeks.

In facing these difficulties Traction is in much the same situation as the whole performing arts sector. Covid-19 is a threat to humanity that touches every part of economic or social life. But the performing arts, which bring hundreds and often thousands of people together have hit a wall. No one knows when it will be possible once again to fill all 2,200 seats in Barcelona’s 170 year old Opera House. This autumn, the Liceu was permitted to open at 50% capacity with strict social distancing measures, but it had to close again on 1 November, for at least three weeks. Theatres in Paris, Milan, London, Berlin and elsewhere are in the same position: the Metropolitan Opera in New York has closed its doors until June 2021.

Traction is working in opera but our focus is on co-creation between professional and non-professional artists, to open this art to people who are least likely to have experienced it before. Participatory art, which also depends on bringing people together, faces the same difficulties. The virus is as capable of preventing a music workshop in a prison as it is of closing an opera house.

Although the suspension of community art projects has received far less media attention or government help than the crisis in opera, it is no less serious. These projects work with some of the most vulnerable and marginalised people in society, providing social contact, learning and new life chances, as well as moments of joy. And they are the people who have suffered most during the pandemic. Many artists and small organisations have worked tirelessly to keep the work going during and after the lockdown: some of that work is described in a recent report by the Baring Foundation, Key Workers (full disclosure: I’m a trustee of the foundation).

The pandemic has made Traction’s work more urgent and more useful. The consortium is developing new digital technologies that can support remote co-creation and performance. We will have to rely on them more than we expected: for the time being, our arts workshops and co-creation activities must be entirely online. So this week INO have begun piloting composition on Zoom, and the writing workshops that would have happened in Inis Meáin will happen remotely. We’re also testing how some of this might be possible within the framework of Social VR, where people can meet and work virtually.

There are many difficulties to overcome, and real human contact will still, will always, be central to participatory art. But the technology is getting better and remote working is changing how we can be and create and be together. Irish culture and language belong in the modern world. Suddenly, the Aran Islands do not seem so remote,

My Tweets
Join 4,508 other subscribers