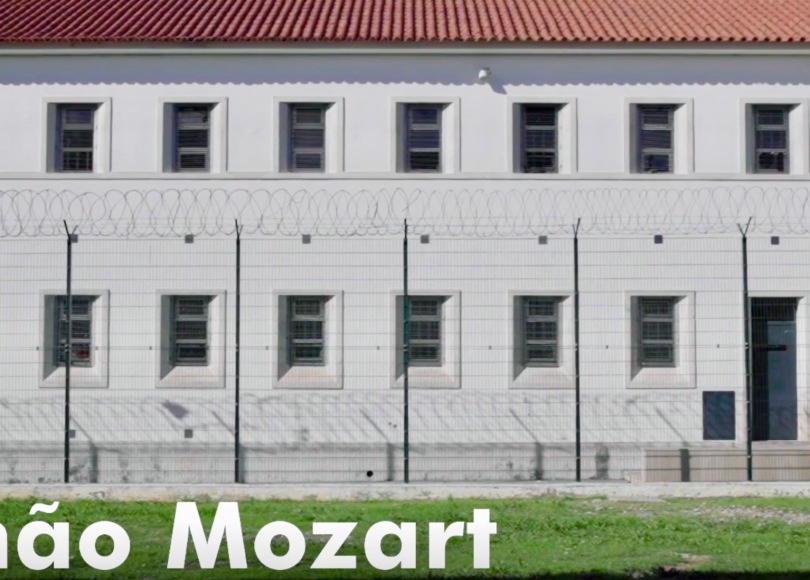 Theatres tend to be beautiful spaces, created with all the skill that architects, carpenters, plasterers and painters can summon. And few are more sumptuous than 19th century opera houses, where gold paint, velvet and twinkling chandeliers were lavished to make the nobility feel at home, and give the public a glimpse of another world.

But the show ends on the far side of the pass-door. Backstage, it’s all narrow corridors and windowless rooms, fire buckets, exposed wires and flaking paint. No one decorates the engine room: they just keep the boilers working. Without those working parts, though, there is nothing to present in the auditorium. It’s in the bare rehearsal room that imagination flourishes and art is created.

That is why today’s inauguration of the Mozart Pavilion in Leiria Youth Prison is so important. A space for creative work, it represents not just recognition of art’s potential in rehabilitation but a commitment by the Prison Service to make performing arts training a permanent part of its occupational programme for young inmates, alongside farming and manual crafts.  The presence at the opening of the Director General of the Prison Service and of the Secretary of State for Justice is proof of that commitment.

It has taken five years of work by the artists of SAMP, a local music school with a long commitment to community art, to get to this point. Since 2015, they have worked with the inmates and their families, prison officers, psychologists and managers to create, rehearse and perform their own versions of two Mozart operas: Don Giovanni and Cosi Fan Tutti. These were presented not only within the prison but in the Gulbenkian Concert Hall in Lisbon, with all the logistical and security challenges that involves. Since July 2020, and despite the pandemic, SAMP have run more than 50 workshops at the prison as part of the Traction project. They are, for the first time, creating a new opera, rooted in the ideas and experiences of the prison’s inmates and staff, working with three composers and a librettist. As usual, they have had to work in temporary spaces, such as classrooms, disaffected workshops and dining rooms: when possible, they’ve also worked outside for safety reasons.

So the Mozart Pavilion is a long-cherished dream, made possible by the support of many organisations including the General Directorate of Reinsertion and Prison Services, the Calouste Gulbenkian Foundation, the Caixa Agrícola de Leiria Foundation, the Portugal Social Innovation Initiative and Foundation, Leiria City Council, Leiria Parish Union, Pousos, Barreira and Cortes, among several other artistic partners and friends. It has been created by restoring a disused book-binding workshop and will for the first time offer everyone involved the space and resources to express their talent and fulfil their potential.

Among the resources will be Traction’s digital technology, including the ‘Performance Engine’ being piloted at the opening of the Mozart Pavilion. These tools will enrich the artistic production but also – crucially – facilitate communication within and beyond the prison. The director of SAMP, Paulo Lameiro, has always seen opera as a way to build understanding between the inmates and the society they should one day reintegrate. With digital technology, he says, the project ‘seeks to overcome the concrete walls and the physical grids, and also the human walls and prejudices between outside and inside the prison’. While full accepting the many challenges that remain, he hopes that one day ‘the city of Leiria can have another performance space, which happens to be inside a prison.’

The Mozart Pavilion has none of the elegance and prestige of an opera house, but it is a big step forward for SAMP, Leiria prison and the practice of art in detention. It accepts the idea of the performing arts as a route to rehabilitation and social inclusion, and provides the means to fulfil that potential. This summer, one way or another, the first extracts of the new opera will be performed here and in Lisbon, before the full-scale production in 2022.  But in the end, important as they are, these concert hall performances are secondary to the process of human development that the Mozart Pavilion will support.