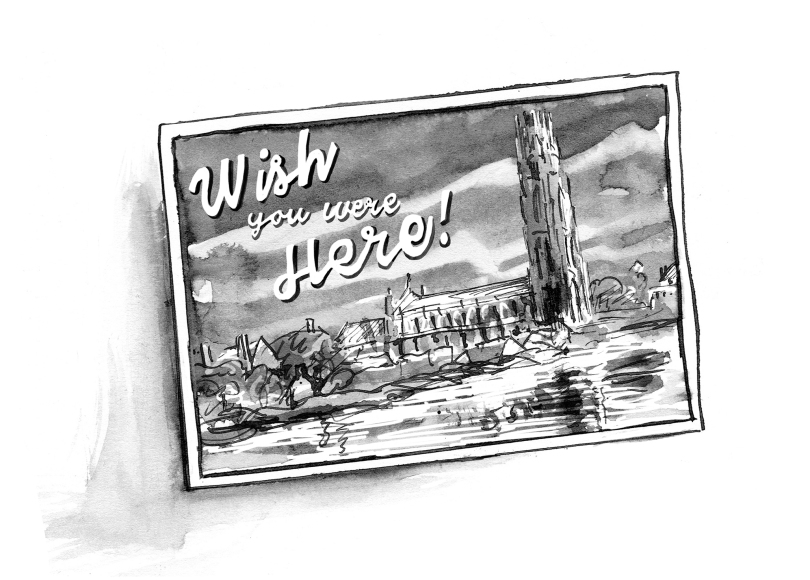 We’ve almost made a book. The final proofs went out to the writers of ‘Wish You Were Here’ on 1 July, with a draft cover design and sketches for the banners that will accompany the launch. There’s nothing quite like this moment, when a process of shared creation begun in hope and ignorance months earlier is on the threshold of fulfilment. Although I’ve been doing this for so long, the creative mystery never fails to delight. This project began in the depth of winter, when seven strangers met for the first time in a video call. For me, tasked with facilitating the sessions, it was a somewhat anxious, stressful time. I’d never done creative work over the Internet before, and I was in another country and a different time zone. I have rarely felt more exhausted by work as I did after those sessions. I worried, even though I trusted the process to work its magic. And it did.

In the following weeks, people shared their writing, and through it their experience, stories and imagination. Confidence and friendship grew. We became a small community, with common ground and purpose. (One reason I persist in describing this work as ‘community art’ is that it creates community as much as responding to it.) And now, we almost have a book – and it’s beautiful. Thirty two stories and poems, 150 pages, and all with a coherence of tone that I find powerful and moving. I hesitated about the subtitle, ‘Writing from Boston’s Lockdown’, fearing that it would create a limiting impression. But the book is of this moment, and that is part of its strength. The stories are mostly not about lockdown, but they were composed during it and it marks them.

The book will be launched in September, when Boston, with wonderful serendipity, is organising a book festival. There’ll be news of how to buy or download a copy nearer the time. For now, I’m just delighted to see the mysterious process of community art create something special that did not exist a few months ago.